It’s a disgustingly hot and humid September afternoon at Palmer Trinity School in Palmetto Bay, Florida, where I teach history and coach varsity cross country. The weather doesn’t deter one of my top runners—an eighth grader who runs 3.1 miles in 18:36 minutes—from giving everything his has on his last four-mile repeat. As he makes the final turn and sweat beads off his grit-determined face, I yell one simple command—“Enjoy the pain.”

To become stronger and faster, pain is necessary. Muscles must be broken down and rebuilt in response to heightened physical demand. Capillary capacity must improve to ease the flow of oxygen into cells. Bones must become denser and the heart stronger, more efficient. Only through experiencing this process, however painful, can runners hope to reach their fullest potential.

As I read Dr. Wendy Mogel’s most recent book,The Blessings of a B Minus: Using Jewish Teachings to Raise Resilient Teenagers, I consider a more profound idea. Outside of running, adolescents must experience pain to blossom into healthy-functioning adults.

I wonder if well-intentioned parents are too worried about always having their kids succeed, without affording them ample opportunity to learn from experiencing pain, failure, or disappointment. I strongly believe that the media has created a false sense of fear, largely contributing to what could be called over-parenting.

I’m not a father, nor do I profess to be an expert, but on Monday I reached out to Mogel to get her take: “We imagine that every single teenage girl is taking naked ‘selfies’ of herself and sending them to everybody she ever met,” she says. “Every boy is just smoking weed all day long every day,, and doing nothing else. That’s not one bit true. It is a small part of the population, but it is so sensational. Low probability, highly sensational worries make the headlines.”

Increasingly, I also get the sense that parents believe that today’s world is far more dangerous—filled with significantly more violence and corruption that didn’t exist when they were kids.

“What happens to parents is every scenario turns into life and death, because of our protective instinct, and because of our sense that the world is so dangerous,” Mogel says, as I shake my head in agreement. “The world is actually [much] safer than it’s ever been.”

Mogel is a world-renowned expert, who, in addition to serving on the scientific advisory board ofParents Magazine, and is also a frequent guest on national news programs likeThe Today Showand CNN. I don’t at all doubt her veracity, but I did some of my own digging to support her claim. After a quick Google-search, I came across a 2006Washington Poststory by Tara Bahrampour, “Discovering A World Beyond The Front Yard.”

Bahrampour speaks with Ernie Allen, who currently serves as president of the National Center for Missing and Exploited Children, and he informs her “that the number of abductions by strangers has remained steady over the years and is lower than many people imagine.”

“According to center statistics, about 115 of 260,000 child kidnappings a yearfit the classic scenario most parents fear: children snatched by strangers,” Bahrampour writes. “Most kidnappings are done by family members or by people the children know. Still, high-profile cases of abduction by a stranger have sowed fear, especially sinceand 24-hour news have made the details easier to disseminate.”

In 2013, with even greater access to news and information, I can barely begin to fathom what role the media plays by using scare tactics to garner ratings while artificially heightening any parent’s worst fears. From speaking with Mogel, I get the impression that in too many cases, overprotective parents respond by going to great lengths to cloister their children from experiencing the slightest degree of adversity.

Because of the ways those parents are responding to sensationalized media reports, I fear that many kids, upon entering adulthood, won’t possess the resiliency that comes from having experienced pain—nor will they have a fully developed understanding of how to cope with disappointment, consequences, or heartache.

As I speak with Mogel, I think that in trying to protect children from the “big, bad world,” well-intentioned parents try to compensate by overstepping their roles rather than letting kids learn from experience—without question, the greatest teacher of all.

In this respect, Mogel and I discuss how unfortunate it is that more and more parents blame teachers and administrators, and not their own child, for receiving lower grades. Parents fear that this could have dire consequences, especially in preventing their kids from getting into respectable universities.

“I talk to teachers all the time. I do faculty empowerment and humor workshops to prepare them for difficult parent‑teacher conferences,” Mogel says. “They’re afraid to give any grade below a B or in some schools below an A-. It’s getting to be not worth the trouble. We are denying kids really useful feedback about the relationship between effort and outcome.”

InThe Blessings of a B Minus, Mogel also talks about parents who, in trying to help their son or daughter gain admittance to a top-rated school, commit horrible acts.

“We imagine that our child’s college placement is what predicts their whole future,” Mogel tells me. “If the parents aren’t rewriting the [] essay behind their back, then the school with perfectly fine college counselors is considered insufficient. Parents are hiringcollege application prep people and spending lots of money onprep as well.”

I also wonder what message this sends, that parents lack the faith in their own kids to get in somewhere on their own. Reflecting on my chat with Mogel, however, makes me reconsider my stance.

“I really empathize with parents. They have the impression that every single other parent is doing this,” she says. “If they don’t do it, it’s an out‑of‑level playing field.”

Parents should rest assured that in all likelihood, their child will get into college. What’s much less certain, though, is how a graduating high school senior, having been exposed to limited suffering, will fare away from home for the first time—without mom or dad to offer shelter from the storm. 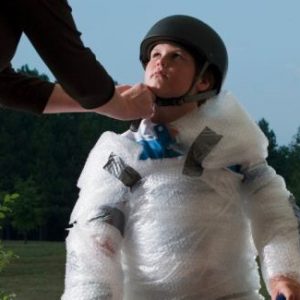 The Real Dangers of Childhood: How Do We Help People See Them?
Rae Pica

It’s Up to Us: Bridging the Distance between Home and School
Julia G Thompson
Emergent Learning: Antidote to the Push-Down Approach
Gail Multop

11:23
How School Nurses Are Partnering With Public Health Nurses
Donna Mazyck
07:41
Ed Tech Problems: Avoiding Those You Can, Managing Those You Can’t
Ferlazzo - EdWeek
Dealing With the Unspoken Issues Male Early Childhod Educators Face
BAM! Radio Network
11:56
Using Technology to Avoid the Dreaded Summer Learning Loss
BAM! Radio Network
10:26
Balancing the Pros and Cons of Social Transparency at Your School
Joe Sanfelippo
05:38
[Part – I] Flipping Your Class? Do This, Puh-Leeze Don’t Do That
Jon Bergmann