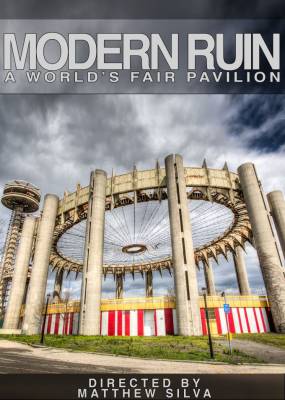 What is your earliest memory? I vaguely recollect riding on the monorail with my parents at the 1964 World’s Fair in Flushing Meadow, Queens. The monorail was one of three attractions at the Fair from the Disney company (the other two wereIt’s a Small Worldand theCarousel of Progresswhich are now in the Disney theme parks). I’ve since been to Flushing Meadow Park many times because I have brought my own kids to visit the Queens Museum which houses thePanorama of the City of New Yorkwhich is a scale model of the entire city, also a World’s Fair exhibit. When I first went there I used a pair of binoculars you could borrow to locate my own house, 1530 Albany Avenue in East Flatbush, Brooklyn.

Last spring I had the opportunity to attend the world premiere of a film by a young and astounding filmmaker.Modern Ruin: A World’s Fair Pavilionis a documentary about thehistory of the 1964 World’s Fair and especially the New York Pavilion. The filmmaker is a teacher from our school, Matt Silva. Matt teaches technology and also videography. His students create professional quality videos that support numerous school initiatives. Each year they produce avideoto accompany our bully prevention kick off that is the centerpiece and a highlight of the day. The subject of the documentary was theNew York Pavilion, a structure originally built for the 1964 World’s Fair. The Pavilion remains in the park today and is slowly deteriorating.

Matt was inspired to create the documentary when he took students in his middle school technology class on a trip to visit theHighlinein Manhattan. The Highline is a unique civil engineering accomplishment. It’s designers repurposed the dilapidated Westside Highway into an elevated urban park that runs from 19th to 33rd Street on the west side of Manhattan. As a child I rode in a car on the Westside Highway with my family on our way to my grandfather’s bungalow in Upstate New York. Such was the state of the highway’s disrepair that my dad joked, “It’ll be a miracle if we don’t fall through this thing before we get there.” I was scared!

Matt planned the trip to the Highline so that his students would understand how urban planning works, how architects and engineers can re-purpose a structure to make it more useful for its present environment and context. Matt understood how important it was for his students to see firsthand the results of an urban planning initiative. He also invited Architect Frankie Campione, the principal engineer ofCREATE Architecture Planning & Design, to come to school and discuss efforts to preserve the Pavilion. Field trips and guest speakers are among the most powerful and memorable learning experiences for middle school kids. They allow students to grasp the relevance of concepts they learn in the classroom and they cement connections between the curriculum and the world in which we live.

On the way back from Manhattan on the day of the trip, Matt had the bus pull off the Grand Central Parkway to visit the former site of the 1964 World’s Fair and see the New York Pavilion, which sits in it’s original location next to Flushing Bay in Queens. Inspired by the visit, Matt challenged his students to create a plan for the repurposing of this aging and dilapidated structure. Matt kicked off the activity by reading a quote by the late activist and preservationist Jacqueline Kennedy Onassis, who, in the 1970’s, when she stood up to fight against demolition of one of New York’s finest architectural landmarks, Grand Central Terminal remarked:

“Is it not cruel to let our city die by degrees, stripped of all her proud moments, until there is nothing left of all her history and beauty to inspire our children? If they are not inspired by the past of our city, where will they find the strength to fight for her future?”

Students used computer-assisted design tools to create the plan for their vision. They imagined and designed amusement parks, aquariums, museums, shopping malls and community swimming pools that were organic to the Pavilion structure. It was a fantastic example of middle school project-based learning.

But Matthimselfbecame hooked on the project. He was intoxicated with the idea of preserving and re-purposing the Pavilion in a way similar to what was accomplished with the Highline in Manhattan. Serendipity gave way to commitment as Matt became a supporter of efforts to preserve the Pavilion. Along with several like-minded individuals, Matt formed an organization called the People for the Pavilion whose purpose is to raise awareness and educate the world about the rapidly decaying New York Pavilion. From Matt’s passion and his association with the organization camethis superb documentary.

At the film premiere, a member of the preservation society introduced the film by saying, “Our relationship with landmark spaces begins with a powerful story.” Matt’s documentary created a powerful narrative about a structure that occupies an enduring space in the imaginations and memories of generations of people. Matt interviews many of the key figures in the history and the preservation of the pavilion and tells the story of its place at the Fair and in the history of design and architecture. I am a fan of the documentary form. I love documentaries by Ken Burns, I have enjoyed his series on baseball, the Civil War and especially Jazz. Modern Ruin: A World’s Fair Pavilioncan hold its place with any of these fine works. What is most astounding to me about these efforts is the fact that someone who I know, a regular guy, could have accomplished what he did.

But in truth… Matt’s not a “regular guy” — Matt’s an amazing teacher.

Here are afew things his story illustrates about AMAZING teachers:

So… if you’re inspired byMatt’s(@SilvaB612) work, connect with him yourself, and be AMAZING! Your kids deserve no less!!

[Since doing the small scale “Ideas competition” with his students, Matt co-foundedPeople For the Pavilion, produced the documentary and this has lead the organization to partner with theNational Trust for Historic Preservationto organize and launch a full scaleInternational Ideas Competition. More info can be found at:www.nyspideas.org]

10:11
I Thought I Was Only There to Support Students
J. Harper
09:13
The Critical Need for Fantasy Play
Rae Pica
13:02
Hidden Causes of the Achievement Gap Between Boys and Girls
BAM! Radio Network
10:27
Accountability: What are the Alternatives to Using Test Scores for Teacher Evaluations?
Ferlazzo - EdWeek
02
10 Inspiring Educators Volume 1: Episode 4:am
Rae Pica
10:39
Straight A’s Are Not Enough: Teaching Kids to Be Excellent Students
Vicki Davis